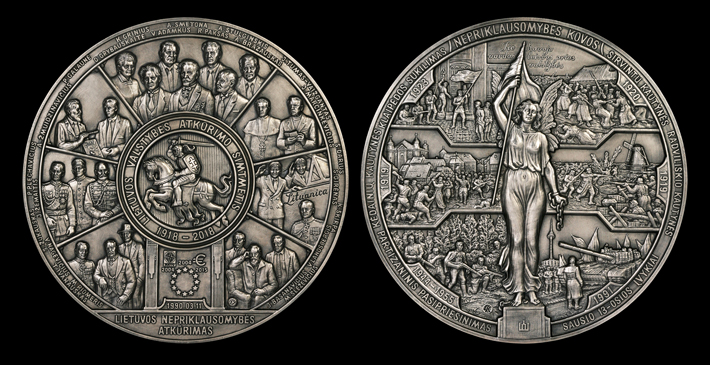 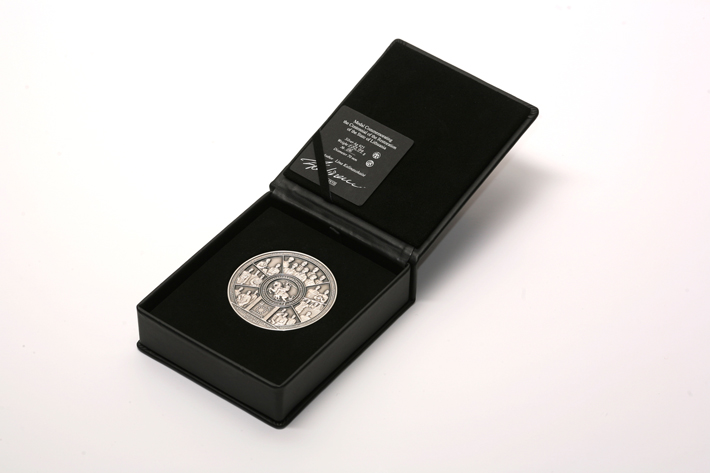 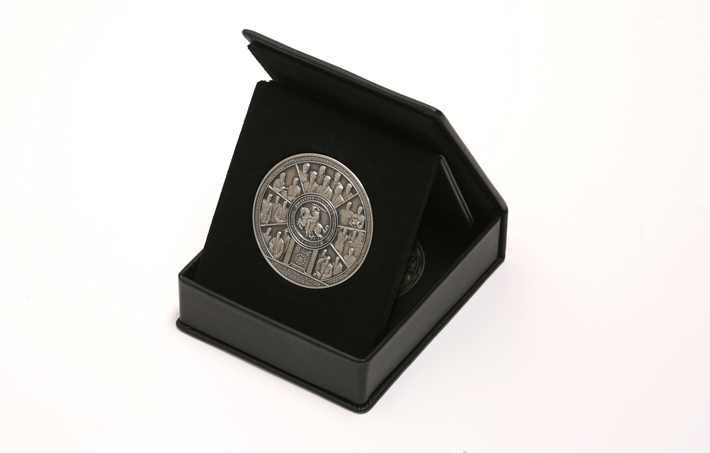 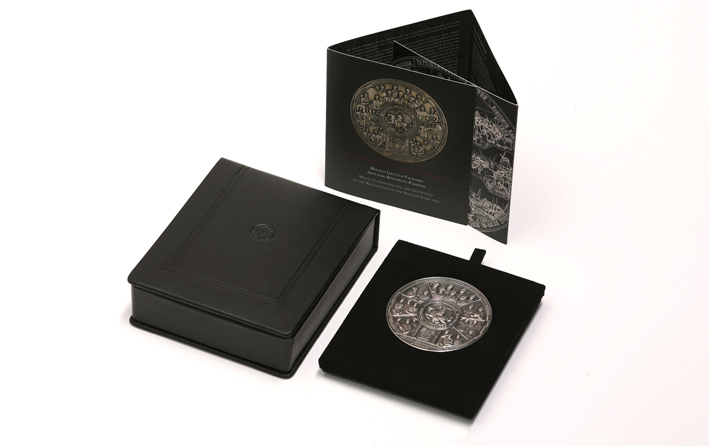 The state of Lithuania celebrates the hundred years anniversary of its reinstatement. It is a great opportunity to remember the people who created this country and those who fought for the idea and ideals of the independent Lithuania.

During this brief yet very important and difficult period of its existence, many famous personalities have been revealed. After the abolition of the serfdom, people from Lithuanian rural areas acquired real opportunities for studying and thus formed an important layer of intelligentsia among the Lithuanian people, which, whenever the occasion allowed, assumed responsibility for the development and fostering of their state. This idea at that time had other alternatives: the country could have become part or province of Poland, Soviet Russia, Germany, and therefore, the contribution of each person in this complicated project of the independent state was critical and decisive. In the medal these people are grouped by fields of activity. The reliefs of their faces and surnames allow to identify people who have assumed the leading roles during the difficult hours – state politicians, military leaders, scientists, poets, artists and other creators. Such presentation of our history, our idea is close to the Lithuanian album of 1930, and is not common nowadays, because we are more inclined to divide, question, doubt and even blacken, rather than being proud and embracing. However, we have some excellent models to follow... It is also possible to compare the restoration of the state of Lithuania with the accession to NATO and the European Union – this is the idea of ​​commemorating this significant fact, which we are not yet fully aware of. Not only every detail, but the whole, is important for the artist as well. There is a lot of Lithuania here, and it is great.

We see the defenders of this idea on the reverse. They are mostly the participants of the Lithuanian independence fight against the Bolsheviks, Bermontians and the Poles, but the Lithuanian partisans and defenders of the state in 1991 also found their place in it. Such presentation of the situation is not new, but it summarises all freedom fights in the motto “They fought for the sake of a free and dignified state”. It is a big step forward in shaping the essential narrative of the defenders of Lithuania, which brings together the past, the present and the future.

The mood of the medal also needs a mention. While on the averse we see our ancestors and patriarchs who did their deeds, on the reverse we see the active figures who do not hesitate to take action. Such a deep emotional charge of the medal also emphasises its main symbols: energetic Vytis by artist Juozas Zikaras and the Statue of Liberation of the same author. It is not coincidences to choose this particular author and these particular figures – the style and expression of this prominent Lithuanian artist are acceptable to the author; they add the documentary aspect to the accurate portraying of idealism, and the inner energy.

Lina Kalinauskaitė in her creativity continues the work started by Juozas Kalinauskas and has created a number of important monuments to their state of Lithuania and Lithuanian soldiers, thus maintaining the course of the idea of ​​the Independence and freedom fights so necessary today, adapting it for the assessor and the state builder of the present day. This metal poetry has its own power, not giving in for devaluation and forgetfulness.