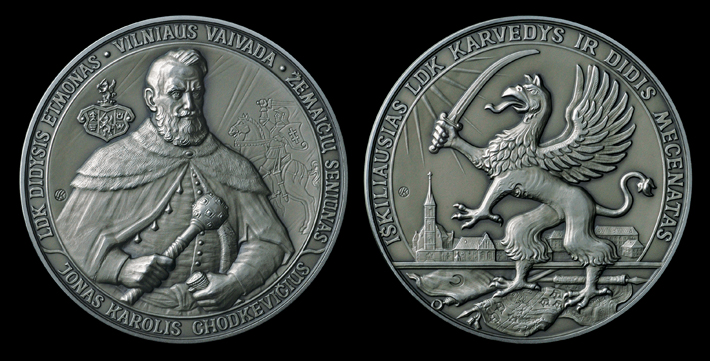 Jan Karol Chodkiewicz (born 1560/61- died 1621 m.) – one of the most famous European generals of the beginning of the 17th century. The nobleman of the Grand Duchy of Lithuania, the Earl of Shklow and Mysz. Worthy statesman: the  Elder of Samogitia (since 1599),  the Great Hetman of the Grand Duchy of Lithuania (1605-1621) and the Voivode of Vilnius (1616-1621); he was significant in the areas of education and culture.

He led battles with the Swedes, Muscovites and Turks, however the eternal fame of the victorious general, which remained in historic memory for centuries, was gained in 1605 in Salaspilis (Kircholm) in Livonia when he defeated a powerful army led by the Swedish King Charles IX with the forces three times greater than his own. The victory of this battle famed J. K. Chodkiewicz in all Europe and beyond it.  In 1621 in the last battle at Khotyn (Ukraine) he led the united army of the Polish–Lithuanian Commonwealth where it successfully withstood the attack of much greater armies of the Turkish and Crimean Tatars and in this way stopped their further expansion into Central Europe.

He was famous not only as a perfect military strategist and tactician, but also as a gifted organizer and administrator, distinguishing himself with great zeal and Catholic piety: in Kretinga J. K. Chodkiewicz built the first church, near Kretinga estate he established the city of Karolštat (Kretinga was called like that in the 17-18th centuries) which was provided with Magdeburg rights, in Skuodas (Johannesburg) he built a school, in Kražiai he established a Jesuit College; later he funded Jesuit churches, altars and monasteries in other territories of the Grand Duchy of Lithuania, subordinate to him.